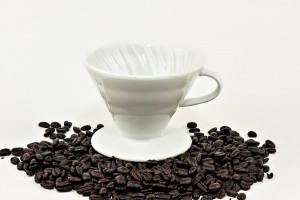 Pour Over Try the classic pour-over method if you want the real essence of coffee. Smooth and rich. Begin with two tablespoons of freshly ground coffee. Heat water to  200 degrees. Fill the pour-over brewer about half full of water and stir gently to make sure the grounds are immersed in water. Allow the coffee to bloom for 30 seconds before adding more water to complete the pour over. 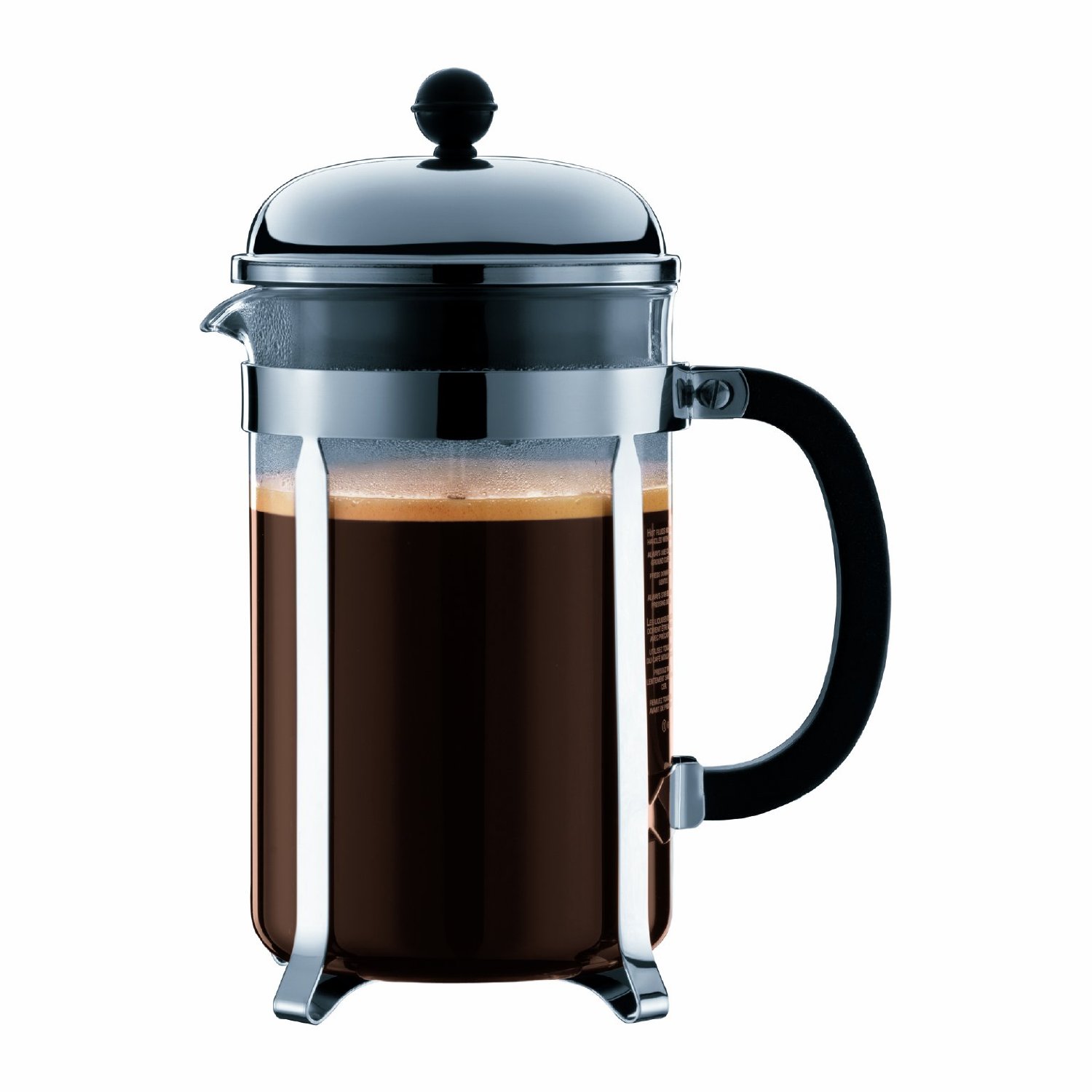 Coffee nerds like it freshly pressed. Press pot coffee is like pop with double the fizz! Use  two tablespoons of freshly ground coffee and water that has been heated to 190-200 degrees. After adding the water to the coffee press gently stir to mix it up. Press the coffee after four minutes. (Experiment with pressing the coffee in two or three minutes. This extracts more of the “front-end” flavors from the coffee.) 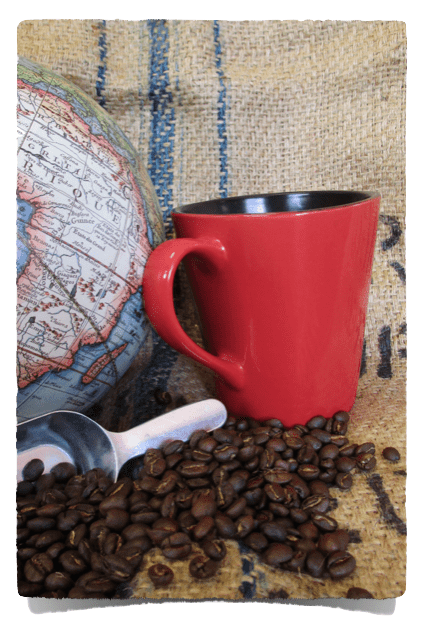 How much ground coffee should you use per brewed cup of coffee? I suggest you start with the following: For 10 cups of brewed coffee use a scant 2/3 cup of beans (measured before grinding). If you have a 12 cup coffee pot use 2/3 cup beans plus a little. Try it and then adjust for your own taste. 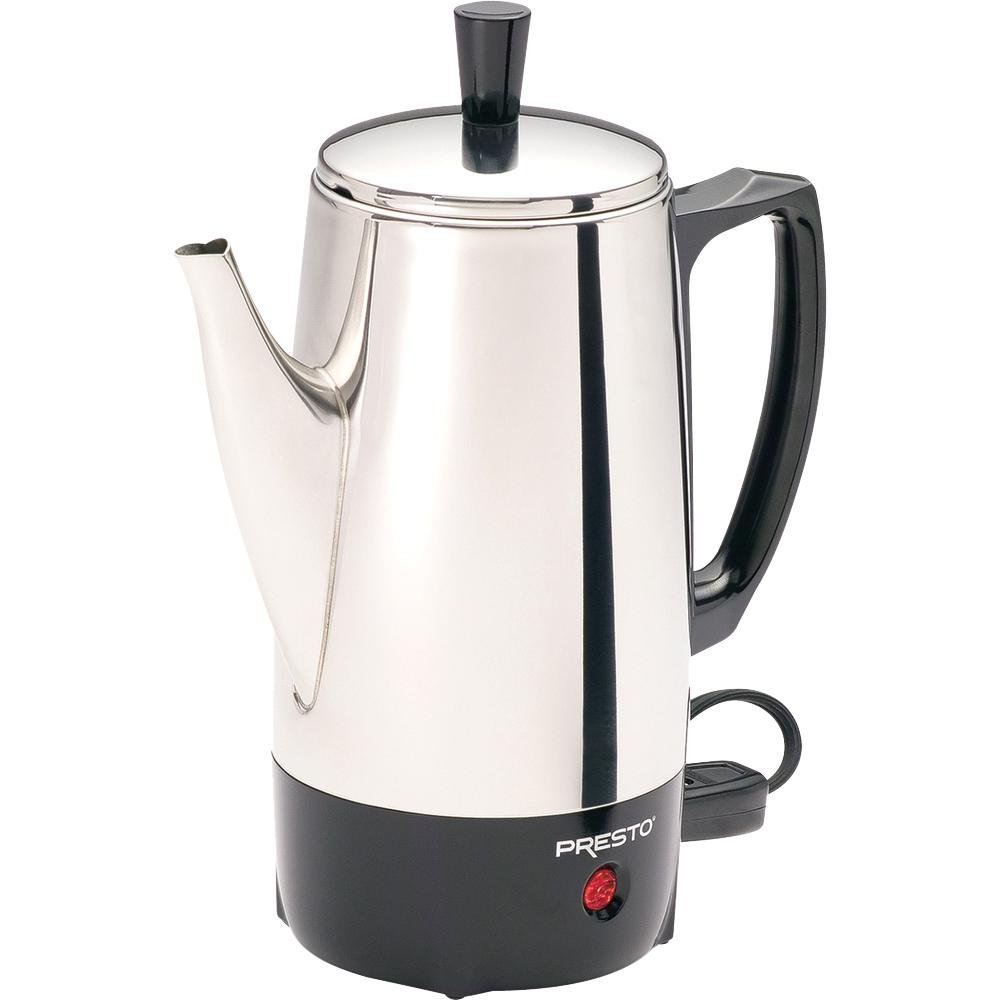 Must you?  If you are making coffee for a crowd then perhaps you must. How many beans should you use for 30 cups? Start with two cups of beans for a 30 cup coffee pot. One of those huge 100 cup coffee pots?  Six to seven cups of coffee beans. Percolated coffee should be served as soon as possible once the brew cycle is complete. The longer it sits the more aroma it looses and it may pick up a scorched flavor. This method of brewing coffee is only a solution for crowds – really it isn’t quite real coffee. 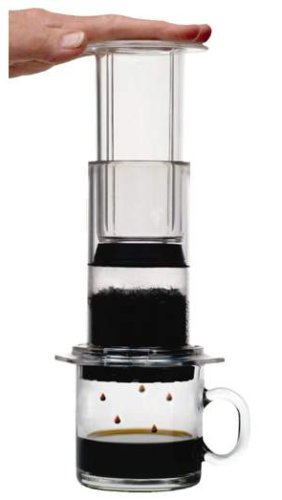 Smooth and easy… that’s AeroPress. I like to begin with coffee ground pretty fine – much finer than a french press grind. I use the coffee scoop that came with the AeroPress – one level scoop. My electric kettle has a digital readout – when it reads 200 degrees I pour water over the grinds and stir it a couple times. Then press the coffee into a coffee cup. I often press the coffee within about 30 seconds. Add more hot water to the cup if the brew is too strong for your taste. Drink and repeat.

When many of us think of making that first pot of coffee for the day we are still in that hazy fog of early morning. We stumble into the kitchen and squint into the cupboard, grabbing inaccurately for the coffee beans. We dump some beans into the grinder and if it’s a cheap blade grinder we hold the button down for what seems like the right amount of time and then dump the grinder contents into our filter basket and add some water. That pretty much completes our ritual of making coffee. And if the hardware store attendant mixed your living room paint that way you’d shop elsewhere. It is worth the effort to put a little thought into the coffee making process. There’s several things necessary and we’ll get to that soon. But first: What is extraction? In the coffee making process it simply means taking those wonderful flavors out of the ground coffee and transferring them to the water to make… coffee! (Is that still too complicated? You really should sleep a little longer if it is.) To get really coffee we need really good coffee beans, a consistent grind and water heated to the correct temperature.

Most coffee lovers agree the ideal water temperature for brewing is somewhere between 190 and 205 degrees f. Why? When the water is cooler some of the desirable flavor properties of the coffee are not extracted. (That means they stay in the ground coffee rather than ending up in your cup!) On the hot side, when the water is too close to boiling, the bitter flavors are extracted from the coffee grounds tending to make the coffee taste… well, Bitter! (That was scientific.)

After you’ve selected a quality coffee bean, the consistency of coffee grind is perhaps the single most influential step in preparing a great tasting cup of coffee. The type of grind must be suitable for the brew method. A point of reference is this: For short extraction times (espresso shots) use a fine grind. Longer extraction times (french press) require a coarser grind. To maximize cup quality for a percolator use a coarser grind. Remember: with a percolator you are cycling the water over the grinds repeatedly and for an extended time. Too fine of grind causes over-extraction. Over-extracted coffee is noticeably bitter.

To purists, the coffee cup represents two ingredients: coffee and water. Water quality matters. If the tap water you drink has an aftertaste you don’t care for, the same water will negatively influence the final outcome of the coffee as well.

Common thinking: to get more out of your coffee beans you can stretch them by grinding them finer or extending the brew cycle. In grinding coffee finer or letting it “steep” longer we may get more out of the coffee bean. But what we get may not be what we want. (OK, so you can accuse me of trying to sell more coffee but hear me out first!) Coffee is like grilled chicken. So if grilled chicken tastes good then grill it more and it will taste better, right? If coffee is ground too fine for the brew method it ends up over-extracted. Skipping over the science of this (mostly because I’m not a scientist), scientists tell us that many of the favorable flavors in a coffee bean are extracted early in the brew cycle. The longer we squeeze the bean in an attempt to wring out all the possible flavor the more we begin to extract the bitter compounds in the coffee. Enough said.

This may be important!

Caffeine content is about the same regardless of roast. Darker roasted coffee doesn’t necessarily have more or less caffeine than lighter roasted coffee. That’s because the chemical properties of caffeine are considered stable at the temperature of the roasting environment. So does a cup of coffee with a four-minute brew cycle have more caffeine than coffee brewed with a two-minute brew cycle? Brew time shouldn’t affect the amount of caffeine that ends up in the cup. Caffeine is extracted early in the brew cycle; thus a longer brewing time doesn’t cause the grounds to “give up” more of this handy little stimulant.

How much caffeine is in decaf coffee? One source cites the following, “In the United States federal regulations require that in order to label coffee as ‘decaffeinated’ that coffee must have had its caffeine level reduced by no less than 97.5 percent.” Some say there’s more than two-and-one-half percent of the original caffeine remaining in decaf coffee. Let’s just be technical and say “most” of the caffeine has been removed.

Sometimes you open a bag of coffee and there are little dots of oil on the beans. What does that mean? Dark roasted coffee can exhibit surface oils shortly after roasting. This is because the heat applied in the roast brings the oil in the bean to the surface. Other coffee will have a dry bean surface when it is fresh and oils appear as the coffee ages. Visible surface oils are usually rancid.  Is that what you thought too?